I’ve created the poster for this year’s Singsational Nottingham!

Please feel free to download a copy to print and display.

I’m making good progress in choosing the songs that we will be singing at Singsational Nottingham! 2014.

We are going to have a brilliant evening singing songs from World War 1.  But I want to make sure that I don’t forget to include any songs that “really should be there”.  So far I have found a home in the programme for such classics as ‘Pack up your troubles’, ‘It’s a long way to Tipperary’, ‘Daisy, Daisy, give me your answer do’ and many more.  What I’d like you to do is visit this web page (https://singsation.org/words-and-music), look down the list of songs and then add in any others you would like to sing in the comments box.
Singsational Nottingham! will commence at 7.30pm on Saturday May 17th at Chilwell Road Methodist Church, Beeston, Nottingham, NG9 1EH. Tickets will cost £5.00 (£1.00 for children) and are available on the door or in advance by contacting 0115 943 1164

Singsational Nottingham! is raising money for Hope Nottingham and Help for Heroes.

I’m delighted to be able to announce that Singsational Nottingham! 2014 will take place on Saturday May 17th at 7.30pm in Beeston, Nottingham.

To recognise the fact that this year is the centenary of the start of the First World War, this year’s evening will be based on songs from that era, but with a local flavour, so that we can explore how the terrible events that followed affected the local community.

The evening will not be all “doom and gloom” however and I am writing a short play called “Hop the Pigeon” which will pull all of the songs that we are going to sing into a story.

Hop the pigeon shows us what to do

I’ll send out more posts about Singsational Nottingham! 2014 in the next few days, but in the meantime if you would like to contact me to find out more, please use the form below.

Now that Singsational Nottingham! over my family and I can get back to normality!

We’ve just eaten Sunday lunch at the dining table for the first time since mid-January (it was too full of script drafts, copies of music and endless “to-do” lists before) and I’ve actually been into the garden to see if there is anything growing out there (there is – mainly weeds and the grass)!

I hadn’t realised how much the organisation of the event had taken over my non-work life for the past few months and whilst there is not a Singsational Nottingham!-shaped hole there yet (there is still plenty of post-show stuff to do), I know that within a very few days I will be wondering what to do with my evenings.

However, after the success of last night I can’t believe that there will not be another performance sometime soon.  I’d like to do another one somewhere around Nottingham, but if anyone out there fancies using the script, format etc., somewhere else in the country (or in the world!), get in touch.  It really was a great evening and not too difficult to put on.  And the audience loved it – I’ve had emails and facebook messages from people of all ages saying what a brilliant time they had and asking when the next Singsational Nottingham! will be.

So the formula is well and truly tested and the public have spoken.  Time to get back in the shower now and see where I’m going to take Singsation! and Singsational Nottingham! next!

I can’t believe I’m writing this, but Singsational Nottingham! is over and it raised the best part of £600 for Water Aid.

The audience thoroughly enjoyed themselves and sung with as much enthusiasm as anyone could hope for.  “Mabel takes a shower”,the “playlet” that joins the songs together worked really well and the shower cubicle didn’t fall over!

The band played magnificently and the two leads, Mabel and Frank did a brilliant job at telling the story and leading the songs.  In addition we had two great guest choirs, “In Seventh Heaven” (a Ladies Barbershop group) and the Wollaton Male Chorus, who sang magnificently and added a real air of quality to the evening.

During the interval six choirs had “stalls” and we built a “musical map” of Nottingham,which showed that there were members of at least a dozen choirs at the event – no wonder the singing was so good.  And they would still have been chatting now if we had not dragged them in for the second half.

I’ve got so many people to thank  I don’t know where to start.  But safe to say, Singsational Nottingham! has really demonstrated what can happen when a community of people work together to get something to happen.  Thanks to everyone who helped and supported.

I’ll be posting pictures and video in the next few days.  In the meantime, if you want to do your bit for Water Aid, visit my Just Giving page at http://www.justgiving.com/singsational-nottingham

Now I’m off to bed (I wonder how long it will be before I get the tunes out of my head and manage to get to sleep?)

Thank you and Good Night!

The final countdown has started. Here is what is going on!

We finally made the local paper on Saturday, so a few people may see that. I’ve written the programme and prepared the word sheets for those in the audience who don’t want to use the screen. I have created a “Just Giving” page for people who can’t come to be able to make a donation to Water Aid and I’m listening to BBC Radio 2 which happens to have a week of programmes dedicated to the voice, ending on Saturday! http://www.bbc.co.uk/programmes/p017q214

Friends have put all the words for the songs into a presentation package so they can be projected; collected numerous props (including a bucket, axe and several dozen shower caps); arranged to record and video the evening that it can be loaded on You Tube and built a “shower cubicle” (which has a significant role to play in the proceedings).

If you want to know why we need a shower cubicle, you’ll have to go onto You Tube next week. I’ll blog when there is stuff to see.

What am I worried about? Actually it is mainly the traffic and parking. Beeston is currently in chaos because a new tram line is being built – and it is this week that things have really “kicked off”. So no-one really knows what the traffic will be like on Saturday evening, but it is crazy during the day.

Here is my message to myself at 2.00 in the morning!

And some really good news. You may remember that I wrote to Helen Chadwick,the “Water Aid “composer”, telling her about Singsational Nottingham! and asking her what her favourite warm up is. She sent me a lovely email today, wishing us luck and telling me about a “call and response song” OLEO; I’m going to look it up!

Over the past few weeks of organising Singsational Nottingham! I have spent a fair bit of time writing this blog (www.singsation.org), updating the Singsation! facebook page (www.facebook.com/singlikeyourintheshower) and sending out emails to my contacts via Mail Chimp. I know that everyone who has been “following” the development of the event would love to be here in Beeston, Nottingham, next Saturday, April 20th, but unfortunately for many of you, it will be too far to travel.

I have created a Just Giving page which will enable you, at the click of your mouse, to make a donation to Water Aid, just as if you had been with us!

After the event I will upload some photos (and hopefully video) so that you can see exactly what we got up to. They might inspire you to donate even more (there will be no refunds, whatever happens!), so expect to continue to receive these updates even after Singsational Nottingham! is over.

Here is the link to the Singsational Nottingham! page, on Just Giving, for Water Aid. Please use it 🙂

I’ve just spent the evening with three friends, all of whom sounded as if they were speaking a foreign language, sorting out the technical requirements for making Singsational Nottingham! (www.singsation.org) a success.  There was a lot of talk of VGA splitters and composite feeds, but basically it means that we will be able to have the song words on screen for both the audience and the performers.

Plus (and this is the best bit), when the stars of the show (Frank and Mabel) watch the telly, what they will see is the audience!  We’ll have a video camera pointing towards the audience, so they will be the football crowd (singing “I’m forever blowing bubbles”) and the Proms audience (singing “Jerusalem”)!

Having the video cameras there means we should be able to upload Singsational Nottingham! on YouTube after the show – so then everyone, where ever they are in the world, will be able to join in a great sing-a-long evening of entertainment.

VGA splitter – not musical; but vital!

We discussed lighting and sound too. All in all, this is turning into a proper show. And thank the Lord for talented, generous friends. 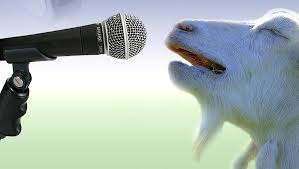 It doesn’t matter what your voice is like. You are still welcome at Singsational Nottingham!

I’ve not done anything on the blog for a while because I have been enjoying the Easter holidays instead.  But I have added some more words and music to http://www.singsation.org so that you can go and remind yourself how “Jerusalem”, Singing in the rain”, Show me the way to go home” and “I’m gonna wash that man right out of my hair”.

I’ve also  got the musicians lined up.  We’re having a couple of rehearsals and the second one, at 7.30pm on April 19th at Chilwell Road Methodist Church, Beeston, Nottingham NG9 1EH, is open to anyone who wants to come along and sing through the songs.  I want to check that everything runs smoothly, identify any points that need to be explained to audience etc., plus the more people who know what should happen next at Singsational Nottingham! at 7.30 pm on April 20th  (in the same place), the better.

And, a friend has built me a “shower cubicle” so that Mabel (the hero of the show) can actually “sing in the shower”!  What a theatrical / musical experience the evening promises to be.

I’ll keep you updated on progress over the next couple of weeks.